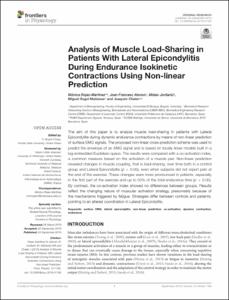 Document typeArticle
Rights accessOpen Access
Abstract
The aim of this paper is to analyze muscle load-sharing in patients with Lateral Epicondylitis during dynamic endurance contractions by means of non-linear prediction of surface EMG signals. The proposed non-linear cross-prediction scheme was used to predict the envelope of an EMG signal and is based on locally linear models built in a lag-embedded Euclidean space. The results were compared with a co-activation index, a common measure based on the activation of a muscle pair. Non-linear prediction revealed changes in muscle coupling, that is load-sharing, over time both in a control group and Lateral Epicondylitis (p < 0.05), even when subjects did not report pain at the end of the exercise. These changes were more pronounced in patients, especially in the first part of the exercise and up to 50% of the total endurance time (p < 0.05). By contrast, the co-activation index showed no differences between groups. Results reflect the changing nature of muscular activation strategy, presumably because of the mechanisms triggered by fatigue. Strategies differ between controls and patients, pointing to an altered coordination in Lateral Epicondylitis.
CitationRojas-Martínez, M. [et al.]. Analysis of muscle load-sharing in patients with lateral epicondylitis during endurance isokinetic contractions using non-linear prediction. "Frontiers in Physiology", 24 Setembre 2019, vol. 10, p. 1-14.
URIhttp://hdl.handle.net/2117/174203
DOI10.3389/fphys.2019.01185
ISSN1664-042X
Publisher versionhttps://www.frontiersin.org/articles/10.3389/fphys.2019.01185/full
Collections
Share: