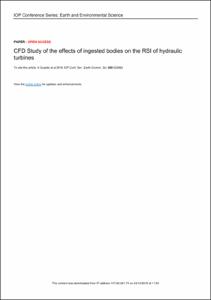 Except where otherwise noted, content on this work is licensed under a Creative Commons license : Attribution-NonCommercial-NoDerivs 3.0 Spain
Abstract
The ingestion of large bodies in hydraulic turbines can produce blockage in the runner and/or the distributor, modifying the amplitude and uniformity of pressure pulsations and generating large unbalanced forces. These unwanted effects can lead to reduced efficiency and increased vibration levels, which can produce significant mechanical damage. In this work, we present a characterization of the effects of flow blockages due to ingested bodies on the rotor-stator interaction (RSI) of hydraulic turbines by means of computational fluid dynamics (CFD). For this, a reduced-scale model of a pump turbine was implemented using Ansys® CFX v16.2, and numerical simulations were run for normal operation and blockage operation. Studied blockages included rotor and distributor blockages. Pressure pulsations in rotor and distributor were recorded in order to characterize the effect of the blockage on the RSI of the machine.
CitationGuardo, A. [et al.]. CFD study of the effects of ingested bodies on the RSI of hydraulic turbines. A: IAHR Symposium on Hydraulic Machinery and Systems. "29th IAHR Symposium on Hydraulic Machinery and Systems 17–21 September 2018, Kyoto, Japan". 2018, p. 1-7.
URIhttp://hdl.handle.net/2117/174199
DOI10.1088/1755-1315/240/2/022063
Publisher versionhttps://iopscience.iop.org/article/10.1088/1755-1315/240/2/022063
Collections
Share: