Prototype of a video game for computer using Unity 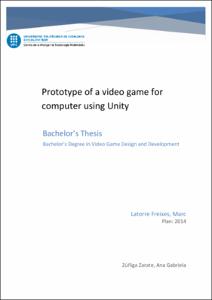 gmail.com
Tutor / directorZúñiga Zárate, Ana Gabriela
Document typeBachelor thesis
Rights accessOpen Access
Abstract
This document is about the game design and development of a prototype 2D, RPG, action platformer videogame using the game engine Unity. Creating a full videogame in those few months and being only myself was impossible, for this reason it ended up being a prototype that can be extended to a full videogame later. The design and programming of the prototype was entirely made by me; however, the art and the music, except for some sprites and animations, was bought or gotten from free open sources. Its primary goal was to create something fun to play for users and in order to do that, an agile methodology was followed, thanks to this a lot of problems and improvements could be done, and, in the end, the prototype actually became fun for most of the testers that played the game. In this document it is described the initial design and all the problems, solutions and changes that it had. The final result can even be considered more than a prototype because of the number of features and the polish it has and can be seen in this link and is under the GNU (General Public License) license.
SubjectsVideo games--Design, Videojocs--Disseny
DegreeGRAU EN DISSENY I DESENVOLUPAMENT DE VIDEOJOCS (Pla 2014)
URIhttp://hdl.handle.net/2117/174168
Collections
Share: