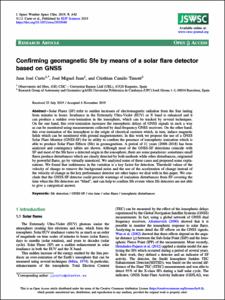 Except where otherwise noted, content on this work is licensed under a Creative Commons license : Attribution-NonCommercial-NoDerivs 3.0 Spain
ProjectTechTIDE - Warning and Mitigation Technologies for Travelling Ionospheric Disturbances Effects (EC-H2020-776011)
Abstract
Solar Flares (SF) refer to sudden increases of electromagnetic radiation from the Sun lasting from minutes to hours. Irradiance in the Extremely Ultra-Violet (EUV) or X band is enhanced and it can produce a sudden over-ionization in the ionosphere, which can be tracked by several techniques. On the one hand, this over-ionization increases the ionospheric delays of GNSS signals in such a way as can be monitored using measurements collected by dual-frequency GNSS receivers. On the other hand, this over-ionization of the ionosphere is the origin of electrical currents which, in turn, induce magnetic fields which can be monitored with ground magnetometers. In this work we propose the use of a GNSS Solar Flare Monitor (GNSS-SF) for its utility to confirm the presence of ionospheric ionization which is able to produce Solar Flare Effects (Sfe) in geomagnetism. A period of 11 years (2008–2018) has been analyzed and contingency tables are shown. Although most of the GNSS-SF detections coincide with SF and most of the Sfe have a detected origin in the ionosphere, there are some paradoxes: sometimes small flares produce disturbances which are clearly detected by both methods while other disturbances, originated by powerful flares, go by virtually unnoticed. We analyzed some of these cases and proposed some explanations. We found that suddenness in the variation is a key factor for detection. Threshold values of the velocity of change to remove the background noise and the use of the acceleration of change instead of the velocity of change as the key performance detector are other topics we deal with in this paper. We conclude that the GNSS-SF detector could provide warnings of ionization disturbances from SF covering the time when the Sfe detectors are “blind”, and can help to confirm Sfe events when Sfe detectors are not able to give a categorical answer.
CitationCurto, J. J.; Juan, J.; Timote, C. Confirming geomagnetic Sfe by means of a solar flare detector based on GNSS. "Journal of Space Weather and Space Climate", 28 Novembre 2019, vol. 9, núm. A42, p. 1-15.
URIhttp://hdl.handle.net/2117/174162
DOI10.1051/swsc/2019040
ISSN2115-7251
Publisher versionhttps://www.swsc-journal.org/articles/swsc/full_html/2019/01/swsc190038/swsc190038.html
Other identifiershttps://www.researchgate.net/publication/337595197_Confirming_geomagnetic_Sfe_by_means_of_a_solar_flare_detector_based_on_GNSS
Collections
Share: