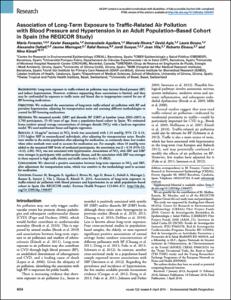 Bouso, Laura
Deltell, Alexandre
Marrugat, Jaume
Ramos, Rafel
Sunyer, Jordi
Vila, Joan
Elosua, Roberto
Künzli, Nino
Document typeArticle
PublisherNational Institute of Environmental Health Sciences
Rights accessOpen Access
Abstract
Background: Long-term exposure to traffic-related air pollution may increase blood pressure (BP) and induce hypertension. However, evidence supporting these associations is limited, and they may be confounded by exposure to traffic noise and biased due to inappropriate control for use of BP-lowering medications. Objectives: We evaluated the associations of long-term traffic-related air pollution with BP and prevalent hypertension, adjusting for transportation noise and assessing different methodologies to control for BP-lowering medications. Methods: We measured systolic (SBP) and diastolic BP (DBP) at baseline (years 2003–2005) in 3,700 participants, 35–83 years of age, from a population-based cohort in Spain. We estimated home outdoor annual average concentrations of nitrogen dioxide (NO2) with a land-use regression model. We used multivariate linear and logistic regression. Results: A 10-µg/m3 increase in NO2 levels was associated with 1.34 mmHg (95% CI: 0.14, 2.55) higher SBP in nonmedicated individuals, after adjusting for transportation noise. Results were similar in the entire population after adjusting for medication, as commonly done, but weaker when other methods were used to account for medication use. For example, when 10 mmHg were added to the measured SBP levels of medicated participants, the association was ß = 0.78 (95% CI: –0.43, 2.00). NO2 was not associated with hypertension. Associations of NO2 with SBP and DBP were stronger in participants with cardiovascular disease, and the association with SBP was stronger in those exposed to high traffic density and traffic noise levels = 55 dB(A). Conclusions: We observed a positive association between long-term exposure to NO2 and SBP, after adjustment for transportation noise, which was sensitive to the methodology used to account for medication.
CitationForaster, M. [et al.]. Association of long-term exposure to traffic-related air pollution with blood pressure and hypertension in an adult population-based cohort in Spain (the REGICOR study). "Environmental health perspectives", 1 Abril 2014, vol. 122, núm. 4, p. 404-411.
URIhttp://hdl.handle.net/2117/174159
DOI10.1289/ehp.1306497
ISSN0091-6765
Publisher versionhttps://ehp.niehs.nih.gov/doi/10.1289/ehp.1306497
Other identifiershttps://www.researchgate.net/publication/260218623_Association_of_Long-Term_Exposure_to_Traffic-Related_Air_Pollution_with_Blood_Pressure_and_Hypertension_in_an_Adult_Population-Based_Cohort_in_Spain_the_REGICOR_Study
Collections
Share: