Combining different implementations of types in a program 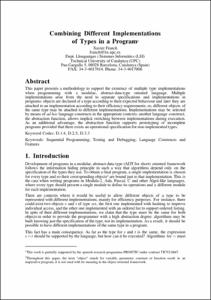 Document typeConference report
PublisherUlm University
Rights accessOpen Access
Abstract
This paper presents a methodology to support the existence of multiple type implementations when programming with a modular, abstract-data-type oriented language. Multiple implementations arise from the need to separate specifications and implementations in programs: objects are declared of a type according to their expected behaviour and later they are attached to an implementation according to their efficiency requirements; so, different objects of the same type may be attached to different implementations. Implementations may be selected by means of ad hoc language constructs in the appropriate contexts; another language construct, the abstraction function, allows implicit switching between implementations during execution. As an additional advantage, the abstraction function supports prototyping of incomplete programs provided that there exists an operational specification for non-implemented types.
CitationFranch, X. Combining different implementations of types in a program. A: Joint Modular Languajes Conference. "Joint Modular Languages Conference: Germany, 28-30 September 1994, University of Ulm". Ulm University, 1994, p. 1-19.
URIhttp://hdl.handle.net/2117/174156
ISBN978-3-89559-220-1
Collections
Share: