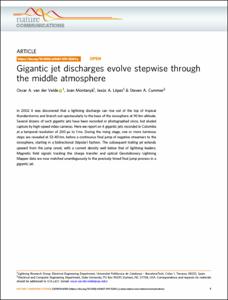 Except where otherwise noted, content on this work is licensed under a Creative Commons license : Attribution-NonCommercial-NoDerivs 3.0 Spain
Abstract
In 2002 it was discovered that a lightning discharge can rise out of the top of tropical thunderstorms and branch out spectacularly to the base of the ionosphere at 90¿km altitude. Several dozens of such gigantic jets have been recorded or photographed since, but eluded capture by high-speed video cameras. Here we report on 4 gigantic jets recorded in Colombia at a temporal resolution of 200 µs to 1¿ms. During the rising stage, one or more luminous steps are revealed at 32-40¿km, before a continuous final jump of negative streamers to the ionosphere, starting in a bidirectional (bipolar) fashion. The subsequent trailing jet extends upward from the jump onset, with a current density well below that of lightning leaders. Magnetic field signals tracking the charge transfer and optical Geostationary Lightning Mapper data are now matched unambiguously to the precisely timed final jump process in a gigantic jet.
CitationVan Der Velde, O. [et al.]. Gigantic jet discharges evolve stepwise through the middle atmosphere. "Nature communications", 25 Setembre 2019, vol. 10, p. 1:4350-10:4350.
URIhttp://hdl.handle.net/2117/174103
DOI10.1038/s41467-019-12261-y
ISSN2041-1723
Publisher versionhttps://www.nature.com/articles/s41467-019-12261-y
Other identifiershttps://doi.org/10.5281/zenodo.3353728
Collections
Share: