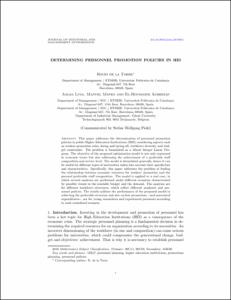 Aghezzaf, El Houssaine
Document typeArticle
Rights accessOpen Access
Abstract
This paper addresses the determination of personnel promotion policies in public Higher Education Institutions (HEI) considering aspects such as worker's promotion rules, hiring and laying off, workforce diversity and budget constraints. The problem is formulated as a Mixed Integer Linear Program. The objective of the proposed optimization model is not only expressed in economic terms but also addressing the achievement of a preferable staff composition and service level. The model is formulated generally, hence it can be useful for different types of universities taken into account their specificities and characteristics. Specifically, this paper addresses the problem of finding the relationship between economic resources for workers'promotion and the pursued preferable staff composition. The model is applied to a real case, in which several analyses are performed under different scenarios characterized by possible trends in the available budget and the demand. The analyses are for different workforce structures, which reflect different academic and personnel policies. The results address the performance of the proposed model in achieving the preferable structure and also on how promotions --and associated expenditures--, are for young researchers and experienced personnel according to each considered scenari
CitationDe La Torre, R. [et al.]. Determining personnel promotion policies in HEI. "Journal of industrial and management optimization", 14 Maig 2019, p. 1-25.
URIhttp://hdl.handle.net/2117/174086
DOI10.3934/jimo.2019031
ISSN1547-5816
Publisher versionhttps://www.aimsciences.org/article/doi/10.3934/jimo.2019031
Collections
Share: