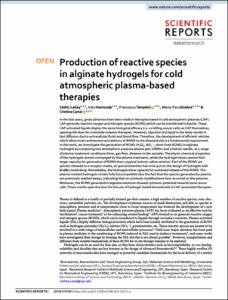 In the last years, great advances have been made in therapies based in cold atmospheric plasmas (CAP). CAP generate reactive oxygen and nitrogen species (RONS) which can be transferred to liquids. These CAP activated liquids display the same biological efficacy (i.e. on killing cancer cells) as CAP themselves, opening the door for minimally invasive therapies. However, injection of a liquid in the body results in fast diffusion due to extracellular fluids and blood flow. Therefore, the development of efficient vehicles which allow local confinement and delivery of RONS to the diseased site is a fundamental requirement. In this work, we investigate the generation of RONS (H2O2, NO2-, short-lived RONS) in alginate hydrogels by comparing two atmospheric pressure plasma jets: kINPen and a helium needle, at a range of plasma treatment conditions (time, gas flow, distance to the sample). The physic-chemical properties of the hydrogels remain unchanged by the plasma treatment, while the hydrogel shows several-fold larger capacity for generation of RONS than a typical isotonic saline solution. Part of the RONS are quickly released to a receptor media, so special attention has to be put on the design of hydrogels with in-situ crosslinking. Remarkably, the hydrogels show capacity for sustained release of the RONS. The plasma-treated hydrogels remain fully biocompatible (due the fact that the species generated by plasma are previously washed away), indicating that no cytotoxic modifications have occurred on the polymer. Moreover, the RONS generated in alginate solutions showed cytotoxic potential towards bone cancer cells. These results open the door for the use of hydrogel-based biomaterials in CAP-associated therapies.
CitationLabay, C. [et al.]. Production of reactive species in alginate hydrogels for cold atmospheric plasma-based therapies. "Scientific reports", 6 Novembre 2019, vol. 9, p. 1:16160-12:16160.
URIhttp://hdl.handle.net/2117/174058
DOI10.1038/s41598-019-52673-w
ISSN2045-2322
Publisher versionhttps://www.nature.com/articles/s41598-019-52673-w