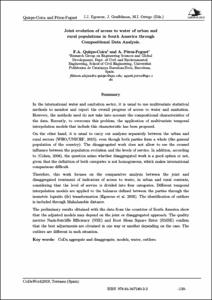 Document typeConference report
Rights accessOpen Access
All rights reserved. This work is protected by the corresponding intellectual and industrial property rights. Without prejudice to any existing legal exemptions, reproduction, distribution, public communication or transformation of this work are prohibited without permission of the copyright holder
Abstract
In the international water and sanitation sector, it is usual to use multivariate statistical methods to monitor and report the overall progress of access to water and sanitation. However, the methods used do not take into account the compositional characteristics of the data. Recently, to overcome this problem, the application of multivariate temporal interpolation models that include this characteristic has been proposed. On the other hand, it is usual to carry out analyzes separately between the urban and rural sectors (WHO/UNICEF, 2015), even though both parties form a whole (the general population of the country). The disaggregated work does not allow to see the crossed influence between the population evolution and the levels of service. In addition, according to (Cohen, 2004), the question arises whether disaggregated work is a good option or not, given that the definition of both categories is not homogeneous, which makes international comparisons difficult. Therefore, this work focuses on the comparative analysis between the joint and disaggregated treatment of indicators of access to water, in urban and rural contexts, considering that the level of service is divided into four categories. Different temporal interpolation models are applied to the balances defined between the parties through the isometric logratio (ilr) transformation (Egozcue et al. 2003). The identification of outliers is included through Mahalanobis distance. The preliminary results obtained with the data from the countries of South America show that the adjusted models may depend on the joint or disaggregated approach. The quality metrics Nash-Sutcliffe Efficiency (NSE) and Root Mean Square Error (RMSE) confirm that the best adjustments are obtained in one way or another depending on the case. The outliers are different in each situation.
CitationQuispe-Coica, F.A.; Pérez-Foguet, A. Joint evolution of access to water of urban and rural populations in South America through Compositional Data Analysis. A: International Workshop on Compositional Data Analysis. "Proceedings of the 8th International Workshop on Compositional Data Analysis (CoDaWork2019): Terrassa". 2019, p. 130-142.
URIhttp://hdl.handle.net/2117/174037
ISBN978-84-947240-2-2
Publisher versionhttps://webs.camins.upc.edu/codawork2019/proceedings/book-proceedings-CoDaWork2019-correctedv.pdf
Collections
Share: