Decentralized shaping for pilot generation and detection in opportunistic communications 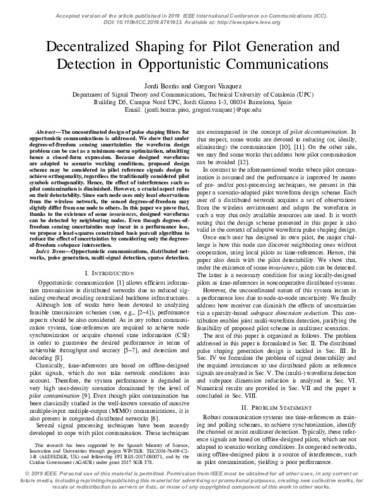 Document typeConference report
PublisherInstitute of Electrical and Electronics Engineers (IEEE)
Rights accessOpen Access
Abstract
The uncoordinated design of pulse shaping filters for opportunistic communications is addressed. We show that under degrees-of-freedom sensing uncertainties the waveform design problem can be cast as a minimum-norm optimization, admitting hence a closed-form expression. Because designed waveforms are adapted to scenario working conditions, proposed design scheme may be considered in pilot reference signals design to achieve orthogonality, regardless the traditionally considered pilot symbols orthogonality. Hence, the effect of interferences such as pilot contamination is diminished. However, a crucial aspect relies on their detectability. Since each node uses only local observations from the wireless network, the sensed degrees-of-freedom may slightly differ from one node to others. In this paper we prove that, thanks to the existence of some invariances, designed waveforms can be detected by neighboring nodes. Even though degrees-of-freedom sensing uncertainties may incur in a performance loss, we propose a least-squares constrained basis pursuit algorithm to reduce the effect of uncertainties by considering only the degrees-of-freedom subspace intersection.
Description
© 2019 IEEE. Personal use of this material is permitted. Permission from IEEE must be obtained for all other uses, in any current or future media, including reprinting/republishing this material for advertising or promotional purposes,creating new collective works, for resale or redistribution to servers or lists, or reuse of any copyrighted component of this work in other works.
CitationBorras, J.; Vazquez, G. Decentralized shaping for pilot generation and detection in opportunistic communications. A: IEEE International Conference on Communications. "ICC 2019: 2019 IEEE International Conference on Communications (ICC 2019): Shanghai, China: 20-24 May 2019". Institute of Electrical and Electronics Engineers (IEEE), 2019, p. 1-6.
URIhttp://hdl.handle.net/2117/173994
DOI10.1109/ICC.2019.8761933
ISBN978-1-5386-8089-6
Publisher versionhttps://ieeexplore.ieee.org/document/8761933
Collections
Share: