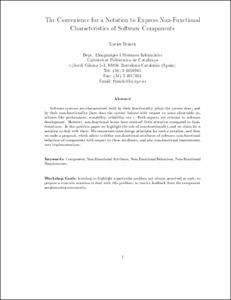 Software systems are characterised both by their functionality (what the system does) and by their non-functionality (how does the system behave with respect to some observable attributes like performance, reusability, reliability, etc.). Both aspects are relevant to software development. However, non-functional issues have received little attention compared to functional ones. In this position paper we highlight the role of non-functionality, and we claim for a notation to deal with them. We enumerate some design principles for such a notation, and then we make a proposal, which allows to de ne non-functional attributes of software, non-functional behaviour of components with respect to these attributes, and also non-functional requirements over implementations.
CitationFranch, X. The convenience for a notation to express non-functional characteristics of software components. A: Foundations of Component-Based Systems Workshop. "Foundations of Component-based Systems Workshop: Zurich, Switzerland september 26, 1997: proceedings". 1997, p. 101-110.
URIhttp://hdl.handle.net/2117/173884