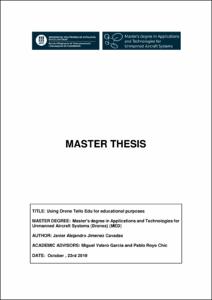 Document typeMaster thesis
Rights accessOpen Access
Abstract
The scope of this project is the Tello EDU drone, both individually and as a swarm. Its main use is for educational purposes. This project makes a study of how the state of art is. At the beginning, the visits to the Tellopilots forum were very recurrent since it served me to see how other developers were working with this drone. This project is responsible for gathering the information that allows anyone without prior knowledge to program a simple mission and also allows to know the development of more complex applications. As a final objective, a main application is proposed, consisting of the control of a swarm of drones with body movements. Due to the disposition of the drones (initially I had only 1 drone, after a while I had the 4 drones), the tests and applications were first performed individually and at when I had the 4 drones, the swarm programming was carried out. That is why the document is also divided into these two variants. To start programming the Tello EDU drone (Individual), it is based on a series of scripts already developed and functional, which are used as templates to develop the most complex applications. After different tests with that script, I could create a script of a basic mission. To start programming the swarm, an existing script is adapted (to control the drones it was done through a .txt file) so that it has a graphical interface of the style that I had used with the individual drone. As in the case of the individual drone, this script provided me with the information necessary to create a basic mission. For the main application, different experiments were carried out in relation to the processing of body movements. Two methods were used for this detection. The results and choice are contained in these experiments. At the same time, other less complex applications were developed.
SubjectsDrone aircraft, Avions no tripulats, Avions no tripulats -- Ensenyament -- Espanya
URIhttp://hdl.handle.net/2117/173834
Collections
Share: