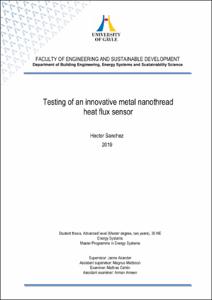 ; Akander, Jan
CovenanteeHögskolan i Gävle
Document typeMaster thesis
Rights accessOpen Access
Abstract
Thermal sensors are currently highly used in building applications to assess losses and determine possible thermal bridges. However, in some cases they are not useful enough because of the field conditions or, sometimes, due to the dimensions of the sensor. This thesis aims to calibrate and test a new product developed by JonDeTech AB company; a tiny heat flux - temperature sensor based on metal nanothreads and a vertical or “out-of-the-plane” thread arrangement. It may have a bright future in measuring local heat flux through building and installation components owing to its tininess. Three methods have been applied. First, calibration with a specific device designed for this purpose in a controlled environment. Second, field test measurements within an ongoing project by Gävle University in Gävle city hall historical building. And third, finite element simulations where the experimental scenarios were replicated. By these methods it was possible to apply corrections on the experimental procedures and make this work more accurate. It was also determined, the calibration curve of the sensor and a slight temperature dependency. In the field measurements, the output of the new heat flux sensor (using the calibration curves) was compared with output from a heat flux sensor available on the market. There is a good correspondence in the dynamics of the two sensors output, but there are discrepancies in the order of magnitude. Finite element simulations indicate that differences in the incidental direction of heat through the sensor are different in-situ and calibration, thus affecting results. Larger deviations are obtained for lower heat flux values (&lt; 10 W/m2). These differences suggest that the calibration procedure can yet be improved. Regarding the usefulness of the studied sensor, its tininess makes it a perfect measurement device in little spaces such as small cavities or narrow frames where other sensor cannot even be placed and also disturbs much less than the ones in the market. Nevertheless, it still can be further developed i.e. encapsulating it in a non-metal guard that would interfere less with the incidental heat.
SubjectsSensor networks, Xarxes de sensors
DegreeMÀSTER UNIVERSITARI EN ENGINYERIA INDUSTRIAL (Pla 2014)
URIhttp://hdl.handle.net/2117/173512
Collections
Share: