Numerical simulation of a cooling tower and its plume 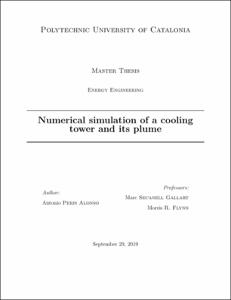 ; Secanell Gallart, Marc; Flynn, Morris
Document typeMaster thesis
Rights accessOpen Access
Abstract
Cooling tower design has been an active area of research for over 40 years with the goalof reduceing the visibility of their effluent water vapor plumes. Plume visibility occurs whenwater vapour leaving the tower is exposed to ambient, cold air, resulting in condensation.In order to minimize plume visibility, the research field of cooling towers has been diverse.On the one hand, research has been conducted on designing cooling towers improving theirplume abatement (from wet and dry to hybrid cooling towers). On the other hand, otherlines of research focused on the evaluation of a predefined cooling tower over a variety ofoperating conditions to determine its optimal plume abatement. The main objective of thisproject is to analyze the effect of the ambient and cooling tower operating conditions onplume visibility.A numerical model based on wet cooling towers has been coupled with a numerical plumemodel that considers the possibility of condensation.The wet cooling tower model proposedby Klimanek and Merkel methods have been used to study the tower. In the case of theplume, a theoretical steady-state plume model that is adapted from the work of Wu andKoh (1978) and Ali Moradi and M. R. Flynn et al. is considered [1] that assumes a uniform,rather than a coaxial plume, and takes into account the event of condensation.The coupling between models, cooling tower and plume, has been carried out using an opensource simulation package especially developed for the analysis and design of cooling towers:CoolIT. As CoolIT already had a wet cooling tower model implemented with Klimanek andMerkel methods, the main task of this thesis was to implement and couple the plume modelto the existing tower models in CoolIT using the Python programming language and object-oriented programming structure. Then, some cases are simulated to illustrate the effect ofplume visibility while comparing both methods and varying certain operating conditions.
SubjectsSimulation methods, Cooling towers, Torres de refrigeració, Simulació, Mètodes de
DegreeMÀSTER UNIVERSITARI EN ENGINYERIA DE L'ENERGIA (Pla 2013)
URIhttp://hdl.handle.net/2117/173507
Collections
Share: