Project of an UAV of infinite autonomy 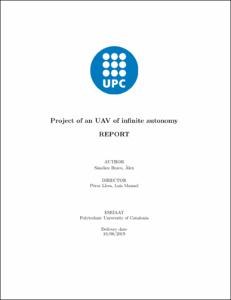 Document typeBachelor thesis
Rights accessOpen Access
Abstract
The purpose of this project has been the design an Unmanned Aerial Vehicle (UAV) able to flyvirtually forever. During day hours such UAV gathers energy from solar panels placed on its wings:one part of this energy is used to keep a levelled flight (i.e. for propulsion and to keep all the othersystems alive) and another part of the energy is stored in the batteries. At nightfall the UAV shouldhave collected enough energy in the batteries to be able to operate all night. This way the designedaircraft is able to keep a levelled, energy balanced flight continuously for 24 hours, closing the cycleand being able to repeat this process again. Apart from the energy balance, the UAV has two otherrestrictions: it must be able to communicate with ground (i.e. to receive instructions and send data)and it includes a Global Positioning System (GPS) aboard.However, truly infinite autonomy is impossible to reach; there will be factors that will degradethe performance of the aircraft (solar cells malfunction, moisture absortion, single or multiple elementfailure, etc.) and won’t allow the UAV to fly forever. For this reason we will callInfinite autonomythe act of closing the loop: that is, to have the batteries replenished every nightfall without any lossof altitude regarding the day before. It should be noted that this has already been reached by someaircraft, with more or less success, something that will be commented briefly. More than a novelinvestigation, then, this work is a glance at leading technology and new technological possibilitiesthrough the preliminary design of an actual solar powered HALE UAV. In the end, a personalassessment of the possibilities and difficulties of this type of aircraft will be done.The most outstanding challenge of this project, what makes this design more remarkably differentfrom that of typical aircraft is the lack of previous similar planes. The usual habit, when nothing isset other than the requirements of the aircraft, is to rely on data from similar planes in the first stepof the designing path —the Conceptual Design. The main difficulty of this project has just been thecalculation of the weight of the aircraft, which is calculated this way: the very low wing loading andthat the structure and materials had little in common with those of usual planes.The methodology of this thesis, in broad terms, has been structured as follows: first an initialstudy was conducted to gain knowledge on previous similar airplanes, the altitude of operationwas also studied and chosen, and the onboard systems that the aircraft would carry were detailed.The initial conditions being defined, a conceptual design was made using approximations from theliterature, with the complication that not always estimations for this kind of aircraft were found —this stage defined the main wing of the aircraft in a way that the energy balance was reached andthe weight of the payload was maximum. The third and last stage of the design was the preliminarydesign of the aircraft, in which the design went one step further in complexity: the power plant andthe aerodynamic and structural configurations of the plane were defined in a concurrent way. Thefinal configuration of the plane yielded a 9,975m2wing surface, 13m/scruise velocity and 9,2kgofweight, with capability of carrying an additional 800 grams (of payload or to account for unexpectedvariations in the weight).The initial study can be found in this document from sections 1 to 3, the conceptual design is allexplained in section 4 and the preliminary design occupies sections 5 to 7. Then section 8 concludesthe work with an overview of the work done and the future steps to follow if the design of this planeis continued.It should also be mentioned that no budget restrictions have been imposed. Of all the assump-tions made in this document, this may well be the most unreal one. However, the aim of this thesisis none other than studying the feasibility of the infinite autonomy of an UAV. In the knowledge thatthis type of aircraft is mainly unstudied, it is expected to be expensive and we should not let this,in the first place, upset the desire of theInfinite Flight.
SubjectsSolar airplanes, Drone aircraft--Design and construction, Avions no tripulats -- Disseny i construcció, Vehicles solars
DegreeGRAU EN ENGINYERIA EN TECNOLOGIES AEROESPACIALS (Pla 2010)
URIhttp://hdl.handle.net/2117/173460
Collections
Share: