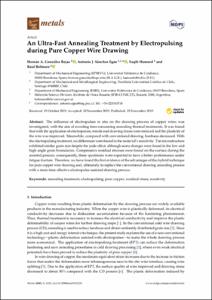 Hameed, Saqib
Bolmaro, Raúl
Document typeArticle
PublisherMultidisciplinary Digital Publishing Institute (MDPI)
Rights accessOpen Access
Abstract
The influence of electropulses in situ on the drawing process of copper wires was investigated with the aim of avoiding time consuming annealing thermal treatments. It was found that with the application of electropulses, tensile and drawing forces were reduced and the plasticity of the wire was improved. Meanwhile, compared with conventional drawing, hardness decreased. With the electropulsing treatment, no di erences were found in the material’s resistivity. The microstructure exhibited similar grain size despite the joule e ect, although some changes were found in the low and high angle grain boundaries. Compressive residual stresses were found on the surface during the assisted process; consequently, these specimens were expected to have a better performance under fatigue fracture. Therefore, we have found the first evidence of the advantages of this hybrid technique for pure copper wire drawing and, ultimately, to replace the conventional drawing annealing process with a more time effective electropulse-assisted drawing process.
CitationGonzalez-Rojas, H. A. [et al.]. An ultra-fast annealing treatment by electropulsing during pure Copper wire drawing. "Metals", 23 Novembre 2019, vol. 9, núm. 12, p. 1253:1-1253:10.
URIhttp://hdl.handle.net/2117/173420
DOI10.3390/met9121253
ISSN2075-4701
Publisher versionhttps://www.mdpi.com/2075-4701/9/12/1253
Other identifiershttps://www.researchgate.net/publication/337491591_An_Ultra-Fast_Annealing_Treatment_by_Electropulsing_during_Pure_Copper_Wire_Drawing
Collections
Share: