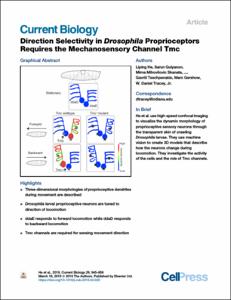 Drosophila Transmembrane channel-like (Tmc) is a protein that functions in larval proprioception. The closely related TMC1 protein is required for mammalian hearing and is a pore-forming subunit of the hair cell mechanotransduction channel. In hair cells, TMC1 is gated by small deflections of microvilli that produce tension on extracellular tip-links that connect adjacent villi. How Tmc might be gated in larval proprioceptors, which are neurons having a morphology that is completely distinct from hair cells, is unknown. Here, we have used high-speed confocal microscopy both to measure displacements of proprioceptive sensory dendrites during larval movement and to optically measure neural activity of the moving proprioceptors. Unexpectedly, the pattern of dendrite deformation for distinct neurons was unique and differed depending on the direction of locomotion: ddaE neuron dendrites were strongly curved by forward locomotion, while the dendrites of ddaD were more strongly deformed by backward locomotion. Furthermore, GCaMP6f calcium signals recorded in the proprioceptive neurons during locomotion indicated tuning to the direction of movement. ddaE showed strong activation during forward locomotion, while ddaD showed responses that were strongest during backward locomotion. Peripheral proprioceptive neurons in animals mutant for Tmc showed a near-complete loss of movement related calcium signals. As the strength of the responses of wild-type animals was correlated with dendrite curvature, we propose that Tmc channels may be activated by membrane curvature in dendrites that are exposed to strain. Our findings begin to explain how distinct cellular systems rely on a common molecular pathway for mechanosensory responses.
CitationHe, L. [et al.]. Direction Selectivity in Drosophila Proprioceptors Requires the Mechanosensory Channel Tmc. "Current Biology", 1 Març 2019, vol. 29, núm. 6, p. 945-956.
URIhttp://hdl.handle.net/2117/173418
DOI10.1016/j.cub.2019.02.025
Publisher versionhttps://www.sciencedirect.com/science/article/pii/S0960982219301642