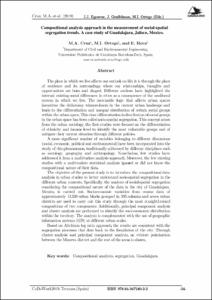 Except where otherwise noted, content on this work is licensed under a Creative Commons license : Attribution-NonCommercial 3.0 Spain
Abstract
Different authors have highlighted the internal existing social differences in cities as a consequence of different economic, social and political forces. The mercantile logic that affects urban spaces incentives the dichotomy winners-losers in the current urban landscape and leads to the differentiation and unequal distribution of certain social groups within the urban space. This clear differentiation in distribution of social groups in the urban space has been called socio-spatial segregation. This concept arises from the urban sociology, the first studies were focused on the differentiation of ethnicity and income level to identify the most vulnerable groups and of mitigate their current situation through different policies. A more significant number of variables belonging to different dimensions (social, economic, political and environmental) have been incorporated into the study of this phenomenon, traditionally addressed by different disciplines such as sociology, geography and anthropology. Nonetheless, few studies have addressed it from a multivariate analysis approach. Moreover, the few existing studies with a multivariate statistical analysis ignored or did not know the compositional nature of their data. The objective of the present study is to apply the compositional data analysis in urban studies to better understand socio-spatial segregation in the different urban contexts. Specifically, the analysis of social-spatial segregation considering the compositional nature of the data in the city of Guadalajara, Mexico, is carried out. Socio-economic and socio-educative variables from census data of approximately 13,520 urban blocks grouped in 395 colonias and seven urban districts are used to carry out this study through the most straightforward compositions of two parts. Additionally, Principal Component Analysis (PCA) and cluster analysis are performed to identify the socio-economic distribution within the territory. The analysis is complemented with the use of geographic information systems (GIS) at different urban scales. Based on Aitchison log ratio approach, the results are consistent with the segregation processes that date back to the foundation of the city. Through cluster analysis and principal component analysis, an evident polarization between the Minerva district and the rest of the areas is shown. Moreover, this method allows to analyse complex and multidimensional phenomena such as socio-spatial segregation.
CitationCruz, M.; Ortego, M.I.; Roca, E. Compositional analysis approach in the measurement of social-spatial segregation trends. A case study of Guadalajara, Jalisco, Mexico. A: International Workshop on Compositional Data Analysis. "Proceedings of the 8th International Workshop on Compositional Data Analysis (CoDaWork2019): Terrassa, 3-8 June, 2019". 2019, p. 39-50.
URIhttp://hdl.handle.net/2117/173377
ISBN978-84-947240-2-2
Publisher versionhttps://webs.camins.upc.edu/codawork2019/proceedings/book-proceedings-CoDaWork2019-correctedv.pdf
Collections
Share: