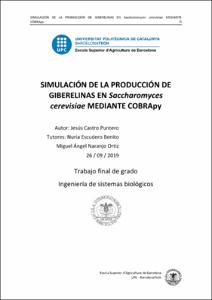 Faced with a population in constant growth (with a forecast of 8.5 billion in 2030 according to the UN), as well as a global climate problem in the coming years, it is imperative to develop new technologies in the field of agriculture. Due to the important role of phytohormones in the growth and maturation of the plant, the use of different hormones such as auxins, gibberellins, ethylene or cytokinins is being researched. The use of gibberellins, phytohormones capable of promoting stem growth, number of inflorescences and resistance to saline stress, is presented as a tool with much potential in the agricultural world. However, current production methods, such as submerged fermentation of Gibberella fujikuroi, are under development, making it unfeasible for extensive use in crops. The use of Saccharomyces cerevisiae as a producer of gibberellins has been modelled in this final grade work. To carry out this task, bioinformatic tools have been used such as COBRApy, a package implemented in Python for the analysis of metabolic pathways of mathematical models using annotated genomes. The use of these tools allows to study in-silico the viability of gibberellin production in S. Cerevisiae. COBRApy allows simulations of metabolic pathways and different studies on the metabolism of the organism, which makes it ideal as an initial phase of a biotechnological project. Once the conditions of the environment have been established, with an input of 10mmol of glucose as the only source of carbon, the maximum production of biomass, gibberellins and the combination of both has been analysed. The maximum production of biomass and gibberellins when optimized separately has been 9.75% and 6.73% of the total carbon flow respectively. In order to improve the production of gibberellins, flow distribution comparison analysis describes a proposal of knockouts that could help redistribute the carbon flow. However, although the in-vivo results may differ, the model does not predict improvements to the gene proposal made. Keywords: GENRE, COBRA, knock-out, terpenes, gibberellins, phytohormones
SubjectsPlant hormones, Hormones vegetals, Creixement (Plantes) -- Substàncies estimuladores
URIhttp://hdl.handle.net/2117/173266

Except where otherwise noted, content on this work is licensed under a Creative Commons license: Attribution-ShareAlike 3.0 Spain