Saturn atmospheric dynamics one year after Cassini: Long-lived features and time variations in the drift of the Hexagon 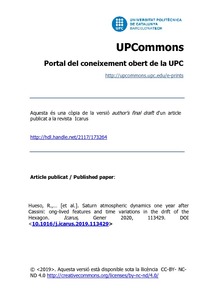 Blalock, J
Colas, Françoise
Gómez Forrellad, Josep Maria
Gunnarson, J. L.
Peach, D.
Wong, Michael
Document typeArticle
Rights accessOpen Access
European Commission's projectGIANTCLIMES - Giants through Time: Towards a Comprehensive Giant Planet Climatology (EC-H2020-723890)
Abstract
We examine Saturn's atmospheric dynamics with observations in the visible range from ground-based telescopes and Hubble Space Telescope (HST). We present a detailed analysis of observations acquired during 2018 obtaining drift rates of major meteorological systems from the equator to the north polar hexagon. A system of polar storms that appeared in the planet in March 2018 and remained active with a complex phenomenology at least until September is analyzed elsewhere (Sánchez-Lavega et al., 2019). Many of the regular cloud features visible in 2018 are long-lived and can be identified in Saturn images in 2017, and in some cases, for up to a decade using also Cassini ISS images. Without considering the polar storms, the most interesting long-lived cloud systems are: i) A bright white spot in the Equatorial Zone that can be tracked continuously since 2014 with minimal changes in its zonal velocity, which was 444.3¿±¿3.1¿m¿s-1 in 2014 and 452.4¿±¿1.7¿m¿s-1 in 2018. This velocity is remarkably different from the zonal winds at the cloud level at its latitude during the Cassini mission, and is closer to zonal winds obtained at the time of the Voyagers flybys and to zonal winds from Cassini VIMS infrared images of the lower atmosphere. ii) A large long-lived Anticyclone Vortex, here AV, that formed after the Great White Spot of 2010–2011. This vortex has changed significantly in visual contrast, drift rate and latitude with minor changes in size over the last years. iii) A system of subpolar vortices at latitudes 60–65°N present at least since 2011. These vortices and additional atmospheric features here studied follow drift rates consistent with zonal winds obtained by Cassini. We also present a study of the positions of the vertices of Saturn's north polar hexagon from 2015 to 2018. These measurements are compared with previous analyses during the Cassini mission (2007–2014), observations with HST in the 90s, and data from the Voyagers in 1980–1981 to explore the long-term variability of the hexagon's drift rate. We find variations in the drift rate of the hexagon through these epochs that can not be fit by seasonal changes in the polar area. Instead, the different drift rates reinforce the role of the North Polar Spot that was present in the Voyager epoch and in the early 90s to cause a faster drift rate of the hexagon at that time compared with the current slower one.
CitationHueso, R. [et al.]. Saturn atmospheric dynamics one year after Cassini: Long-lived features and time variations in the drift of the Hexagon. "Icarus", 15 Gener 2020, vol. 336, p. 113429:1-113429:23.
URIhttp://hdl.handle.net/2117/173264
DOI10.1016/j.icarus.2019.113429
ISSN0019-1035
Publisher versionhttps://www.sciencedirect.com/science/article/abs/pii/S0019103519301861
Collections
Share: