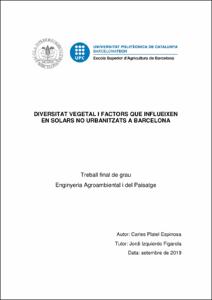 Document typeBachelor thesis
Rights accessOpen Access
Abstract
Barcelona city is dense with a shortage of green spaces and little presence of green in the built space in its urban environment. It has almost 7 m² of green urban area per capita, regardless of Collserola. Therefore, getting more urban green space is a priority objective. If you take into account the green cover that includes the woodland and those surfaces that, despite being rated green, are not green, such as playgrounds, dog areas, petanque courts... it offers us a better situation ( 11.2 m² / hab.), But still insufficient. Given this problem, in the last 4 years and with the current government, the Barcelona City Council has shown a special interest in increasing the m² of green spaces in the city. For this reason, it published the Barcelona green infrastructure and biodiversity plan 2020 with the aim of expanding a square meter of green area per citizen. The new model also aims to move towards a more naturalized green, an ecosystem that conserves and empowers biodiversity and favour natural processes and the spontaneous flora’s and fauna’s entry. The objective of increasing the green in a dense and compact city as Barcelona is increasingly difficult due to the lack of space. But before, to corroborate this hypothesis, it has been decided to follow vegetation up of 4 undeveloped plots, which are owned by the City Council and have different conditions from each other. We will see what relationship exists or what factors influence, including the increase in urban area, in the development of ruderal flora and see how they can be used in case they want to be used to create green spaces. To carry out, 13 visual samples have been taken with 1x1 m plots have been to assess which are the floral species that fits better and what density they have. In this way we could have an idea of the ruderal species that would be more appropriate when promoting the creation of a green space that fosters biodiversity.
SubjectsUrban plants, Zones verdes, Vegetació urbana (Barcelona)
Location
1: Carrer de Betània, 1, 08023 Barcelona, Espanya
URIhttp://hdl.handle.net/2117/173089
Collections
Share: