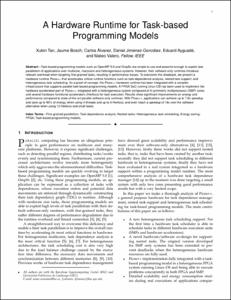 Document typeArticle
Rights accessOpen Access
All rights reserved. This work is protected by the corresponding intellectual and industrial property rights. Without prejudice to any existing legal exemptions, reproduction, distribution, public communication or transformation of this work are prohibited without permission of the copyright holder
ProjectCOMPUTACION DE ALTAS PRESTACIONES VII (MINECO-TIN2015-65316-P)

Abstract
Task-based programming models such as OpenMP 5.0 and OmpSs are simple to use and powerful enough to exploit task parallelism of applications over multicore, manycore and heterogeneous systems. However, their software-only runtimes introduce relevant overhead when targeting fine-grained tasks, resulting in performance losses. To overcome this drawback, we present a hardware runtime Picos++ that accelerates critical runtime functions such as task dependence analysis, nested task support, and heterogeneous task scheduling. As a proof-of-concept, the Picos++ hardware runtime has been integrated with a compiler infrastructure that supports parallel task-based programming models. A FPGA SoC running Linux OS has been used to implement the hardware accelerated part of Picos++, integrated with a heterogeneous system composed of 4 symmetric multiprocessor (SMP) cores and several hardware functional accelerators (HwAccs) for task execution. Results show significant improvements on energy and performance compared to state-of-the-art parallel software-only runtimes. With Picos++, applications can achieve up to 7.6x speedup and save up to 90 percent of energy, when using 4 threads and up to 4 HwAccs, and even reach a speedup of 16x over the software alternative when using 12 HwAccs and small tasks.
Description
© 2019 IEEE. Personal use of this material is permitted. Permission from IEEE must be obtained for all other uses, in any current or future media, including reprinting/republishing this material for advertising or promotional purposes,creating new collective works, for resale or redistribution to servers or lists, or reuse of any copyrighted component of this work in other works.
CitationTan, X. [et al.]. A hardware runtime for task-based programming models. "IEEE transactions on parallel and distributed systems", 1 Setembre 2019, vol. 30, núm. 9, p. 1932-1946.
URIhttp://hdl.handle.net/2117/173031
DOI10.1109/TPDS.2019.2907493
ISSN1045-9219
Publisher versionhttps://ieeexplore.ieee.org/document/8674567
Collections
Share: