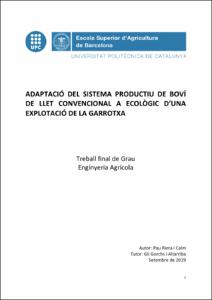 Organic agriculture and livestock are increasingly playing an important role in the primary sector in Catalonia. More and more producers, such as the Mas el Molí de Perer farm in la Vall d'en Bas, are opting for a more respectful production of the environment and ecosystems. It is for this reason, and due to the strong crisis that the Catalan and Spanish dairy producing sector is suffering, that this small family farm decides to start a new productive stage for exploitation and faces it with much desire and enthusiasm. This will allow them to diversify their product by producing organic milk and transforming it, in the future, into dairy products, such as yoghurts and hand-made cheeses. From here, an increase in long-term benefits is expected. In the spring of 2017 the ecological production project is initiated. To obtain the ecological certification granted by the CCPAE, the farm has to pass a conversion period for the land and other for the animals. The conversion to the farm Mas el Molí del Perer has been carried out in such a way that the two corresponding periods of conversion of the land and livestock are completed at the same time. The ecological certification guarantees that the products have been produced or elaborated following the norms of organic farming, and that they have been controlled throughout their production, processing, packaging and commercialization processes. Apart from the conversion, in order to obtain and maintain the ecological certification, a series of norms and rules established by the Catalan Council of Ecological Agricultural Production (CCPAE) must be followed within the notebook of technical norms of ecological agro-food production. Applying this regulation, livestock management changes with respect to conventional production, especially in animal nutrition and health. Regarding the cultivation of forage for livestock, a series of measures are taken, affecting production as little as possible, and most importantly, improving the quality of soil and its biodiversity. Finally, the economic evaluation that has been done, shows that the transformation from conventional to organic production is viable, given that the profitability and/or results of the exploitation improve, going from a negative to a positive business benefit. From this study we want to analyse in detail the steps to be followed by the Mas el Molí del Perer farm to obtain the ecological certification and that this change will imply for this livestock exploitation. The study begins once the conversion period starts, in order to continuously monitor the project.
SubjectsMilk trade, Indústria lletera