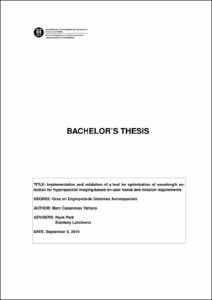 Document typeBachelor thesis
Rights accessOpen Access
Abstract
Copernicusis the most ambitious Earth observation programme to date. Since its launch in 2014, all its services have become fully operational. Since then \Copernicus has provided accurate, timely and easily accessible information to improve the management of the environment, understand and mitigate the effects of climate change and ensure civil security. This initiative is headed by the European Commission (EC) in partnership with the European Space Agency (ESA). ESA coordinates the delivery of data from upwards of 30 satellites. The EC, acting on behalf of the European Union (EU), is responsible for the overall initiative, setting requirements and managing the services. All the data and results obtained are freely accessible by the scientific community or any other interested person. Independent studies point out that thanks to Copernicus programme it could be created 48,000 jobs that translated into profits could be estimated at 30,000 million Euros by the year 2030. Through this programme, researchers from all over the European universities have the opportunity to collaborate, in order to open new avenues of research to provide new tools to future satellites that collaborate with the Copernicus programme. In this context; ESA Copernicus 4.0 Challenge and through the Ph.D. student Estefany Lancheros, this bachelor's thesis has followed the same line of work in which his research has been based. The development of an intelligent tool, installed on the satellite's payload capable of selecting through a hyperspectral image those light's wavelengths that really offer information about the elements studied, whether they are oceanic zones, deserted or rich in vegetation, has been his project purpose. Through a branch of artificial intelligence such as Machine Learning, which acts as a model of analysis and data management, the selection of wavelengths has been effective and it has been possible to build different analytical models to improve efficiency and success in the selection. The purpose of this bachelor's thesis is to add contributions to the software's development, as well as complementing the investigation, by means of its implementation in different space missions that orbit or will orbit the planet Earth in a immediately future and thus verify its reliability and efficiency. The data used for the database development and the software validation have been extracted from the Jet Propulsion Laboratory (JPL), which has been a pioneer in the generation of spectrum libraries of various materials such as water, rocks, sediments, vegetation among others. The spectrum shows the light reflectance percentage by impacting against one of these materials depending on the established wavelength. Thanks to the spectral curvature described in the graphs, characteristic information about the materials can be obtained.
SubjectsRemote sensing, Satèl·lits artificials en telecomunicació, Espai exterior -- Exploració, programari
URIhttp://hdl.handle.net/2117/172998
Collections
Share: