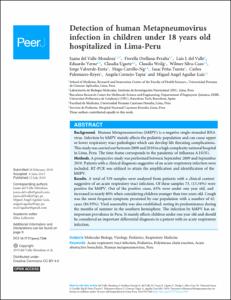 Human Metapneumovirus (hMPV) is a negative single-stranded RNA virus. Infection by hMPV mainly affects the pediatric population and can cause upper or lower respiratory tract pathologies which can develop life threating complications. This study was carried out between 2009 and 2010 in a high complexity national hospital in Lima, Peru. The time frame corresponds to the pandemic of influenza A H1N1. Methods. A prospective study was performed between September 2009 and September 2010. Patients with a clinical diagnosis suggestive of an acute respiratory infection were included. RT-PCR was utilized to attain the amplification and identification of the hMPV. Results.A total of 539 samples were analyzed from patients with a clinical context suggestive of an acute respiratory tract infection. Of these samples 73, (13.54%) were positive for hMPV. Out of the positive cases, 63% were under one year old, and increased to nearly 80% when considering children younger than two years old. Cough was the most frequent symptom presented by our population with a number of 62 cases (84.93%). Viral seasonality was also established, noting its predominance during the months of summer in the southern hemisphere. The infection by hMPV has an important prevalence in Peru. It mainly affects children under one year old and should be considered an important differential diagnosis in a patient with an acute respiratory infection.