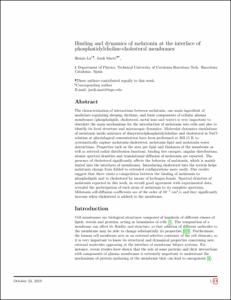 Except where otherwise noted, content on this work is licensed under a Creative Commons license : Attribution-NonCommercial-NoDerivs 3.0 Spain
Abstract
The characterization of interactions between melatonin, one main ingredient of medicines regulating sleeping rhythms, and basic components of cellular plasma membranes (phospholipids, cholesterol, metal ions and water) is very important to elucidate the main mechanisms for the introduction of melatonin into cells and also to identify its local structure and microscopic dynamics. Molecular dynamics simulations of melatonin inside mixtures of dimyristoylphosphatidylcholine and cholesterol in NaCl solution at physiological concentration have been performed at 303.15 K to systematically explore melatonin-cholesterol, melatonin- lipid and melatonin-water interactions. Properties such as the area per lipid and thickness of the membrane as well as selected radial distribution functions, binding free energies, angular distributions, atomic spectral densities and translational diffusion of melatonin are reported. The presence of cholesterol significantly affects the behavior of melatonin, which is mainly buried into the interfaces of membranes. Introducing cholesterol into the system helps melatonin change from folded to extended configurations more easily. Our results suggest that there exists a competition between the binding of melatonin to phospholipids and to cholesterol by means of hydrogen-bonds. Spectral densities of melatonin reported in this work, in overall good agreement with experimental data, revealed the participation of each atom of melatonin to its complete spectrum. Melatonin self-diffusion coefficients are of the order of 10^(-7) cm2/s and they significantly increase when cholesterol is addeed to the membrane.
CitationHuixia, L.; Marti, J. Binding and dynamics of melatonin at the interface of phosphatidylcholine-cholesterol membranes. "PloS one", 7 Novembre 2019, vol. 14, núm. 11, p. e0224624:1-e0224624:20.
URIhttp://hdl.handle.net/2117/172822
DOI10.1371/journal.pone.0224624
ISSN1932-6203
Publisher versionhttps://journals.plos.org/plosone/article?id=10.1371/journal.pone.0224624
Collections
Share: