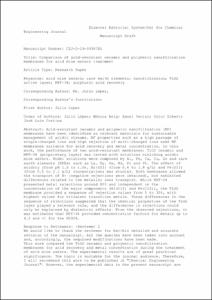 Document typeArticle
Rights accessOpen Access
Abstract
Acid-resistant ceramic and polymeric nanofiltration (NF) membranes have been identified as relevant materials for sustainable management of acidic streams. NF properties such as a high passage of single-charged ions and high rejection of multi-charged ions make NF membranes suitable for acid recovery and metal concentration. In this work, the performance of two acid-resistant membranes: TiO2 ceramic and MPF–34 (proprietary layer) was tested with solutions mimicking acidic mine waters. Model solutions were composed by Al(III), Fe(III), Ca(II), Cu(II), Zn(II) and rare earth elements (REEs(III)) such as La(III), Dy(III), Sm(III), Nd(III), Pr(III) and Yb(III). The effect of acidity (from pH 1.5 to 1.0), Al(III) (from 0.6 to 1.8¿g/L) and Fe(III) (from 0.5 to 2.1¿g/L) concentrations was studied. Both membranes allowed the transport of H+ (negative rejections were obtained), but exhibited differences related to the metallic ions transport. While MPF–34 presented metal rejections around 80% and independent on the concentration of the major components (Al(III) and Fe(III)), the TiO2 membrane provided a sequence of rejection values from 5 to 30%, with highest values for trivalent transition metals. These differences in the sequence of rejections suggested that the chemical properties of the TiO2 layer played a relevant role, and that they could only be explained by dielectric effects. From the observed rejections, it was estimated that MPF–34 provided concentration factors for metals up to 4.2 and <1 for the H2SO4
CitationLopez, J. [et al.]. Comparison of acid-resistant ceramic and polymeric nanofiltration membranes for acid mine waters treatment. "Chemical engineering journal", 15 Febrer 2020, vol. 382, núm. 122786, p. 122786:1-122786:12.
URIhttp://hdl.handle.net/2117/172737
DOI10.1016/j.cej.2019.122786
ISSN1385-8947
Publisher versionhttps://www.sciencedirect.com/science/article/pii/S1385894719321965?via%3
Collections
Share: