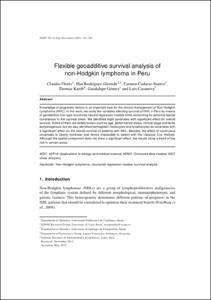 Casanova, Lluis
Document typeArticle
Rights accessOpen Access
Abstract
Knowledge of prognostic factors is an important task for the clinical management of Non Hodgkin Lymphoma (NHL). In this work, we study the variables affecting survival of NHL in Peru by means of geoadditive Cox-type structured hazard regression models while accounting for potential spatial correlations in the survival times. We identified eight covariates with significant effect for overall survival. Some of them are widely known such as age, performance status, clinical stage and lactic dehydrogenase, but we also identified hemoglobin, leukocytes and lymphocytes as covariates with a significant effect on the overall survival of patients with NHL. Besides, the effect of continuous covariates is clearly nonlinear and hence impossible to detect with the classical Cox method. Although the spatial component does not show a significant effect, the results show a trend of low risk in certain areas.
CitationFlores, C. [et al.]. Flexible geoadditive survival analysis of non-Hodgkin lymphoma in Peru. "SORT: statistics and operations research transactions", Juny 2012, vol. 36, núm. 2, p. 221-230.
URIhttp://hdl.handle.net/2117/17270
ISSN1696-2281
Collections
Share: