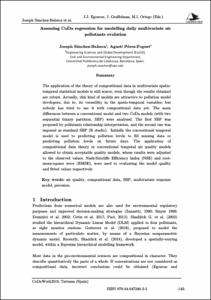 Document typeConference report
Rights accessOpen Access
All rights reserved. This work is protected by the corresponding intellectual and industrial property rights. Without prejudice to any existing legal exemptions, reproduction, distribution, public communication or transformation of this work are prohibited without permission of the copyright holder
Abstract
The application of the theory of compositional data in multivariate spatio- temporal statistical models is still scarce, even though the results obtained are robust. Actually, this kind of models are attractive to pollution model developers, due to, its versatility in the spatio-temporal variables; but nobody has tried to use it with compositional data yet. The main differences between a conventional model and two CoDa models (with two sequential binary partition, SBP) were analyzed. The first SBP was proposed by pollutants relationship interpretation, and the second one was imposed as standard SBP (R studio). Initially the conventional temporal model is used to predicting pollution levels to fill missing data or predicting pollution levels on future days. The application of compositional data theory in conventional temporal air quality models allowed to obtain acceptable quality models, whose results were adjusted to the observed values. Nash-Sutcliffe Efficiency Index (NSE) and root- mean-square error (RMSE), were used to evaluating the model quality and fitted values respectively.
CitationSánchez-Balseca, J.; Pérez-Foguet, A. Assessing CoDa regression for modelling daily multivariate air pollutants evolution. A: International Workshop on Compositional Data Analysis. "Proceedings of the 8th International Workshop on Compositional Data Analysis (CoDaWork2019): Terrassa, 3-8 June, 2019". 2019, p. 143-150.
URIhttp://hdl.handle.net/2117/172673
ISBN978-84-947240-2-2
Publisher versionhttps://webs.camins.upc.edu/codawork2019/proceedings/book-proceedings-CoDaWork2019-correctedv.pdf
Collections
Share: