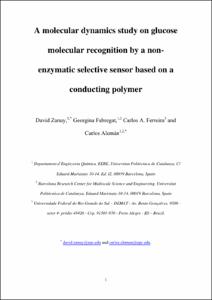 Document typeArticle
PublisherRoyal Society of Chemistry (RSC)
Rights accessOpen Access
Abstract
Poly(hydroxymethyl-3,4-ethylendioxythiophene) (PHMeDOT), a very electroactive polythiophene derivative bearing a dioxane ring fused onto the thiophene ring and an exocyclic hydroxymethyl substituent, is able to electrocatalyze the oxidation of glucose in the presence of interferents (e.g. dopamine, uric acid and ascorbic acid) without the assistance of an enzymatic catalyst. In this work, after demonstrating that the chronoamperometric response of such polythiophene derivatives allows discrimination of glucose from fructose, the PHMeDOT¿sugar recognition mechanism has been investigated using atomistic computer simulations. More specifically, molecular dynamics simulations were conducted on model systems formed by a steel surface covered with a nanometric film of PHMeDOT, which was immersed in an aqueous environment with a few explicit sugar molecules (i.e. glucose or fructose). Analyses of the trajectories indicate that glucose interacts with PHMeDOT forming a well-defined network of specific hydrogen bonds. More specifically, glucose prefers to interact as a hydrogen bonding donor using the hydroxyl group tether to the main sugar ring, while PHMeDOT acts as the hydrogen bonding acceptor. Interestingly, (glucose)O–H¿O(PHMeDOT) interactions involve, as hydrogen bonding acceptors, not only the oxygen atoms of the dioxane ring but also the oxygen atom of the exocyclic hydroxymethyl substituent, which is a differential trend with respect to the other polythiophene derivatives that do not exhibit sensing ability. In contrast, fructose does not present such well-defined patterns of specific interactions, especially those that are distinctive because of the exocyclic hydroxymethyl substituent, making the experimental observations understandable.
CitationZanuy, D. [et al.]. A molecular dynamics study on glucose molecular recognition by a non-enzymatic selective sensor based on a conducting polymer. "Physical chemistry chemical physics", 1 Gener 2019, vol. 21, p. 8099-8107.
URIhttp://hdl.handle.net/2117/172649
DOI10.1039/c9cp00567f
ISSN1463-9076
Publisher versionhttps://pubs.rsc.org/en/Content/ArticleLanding/2019/CP/C9CP00567F#!divAbstract
Collections
Share: