Entropy measures as descriptors to identify apneas in rheoencephalographic signals 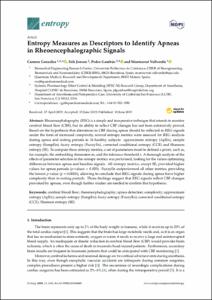 Except where otherwise noted, content on this work is licensed under a Creative Commons license : Attribution-NonCommercial-NoDerivs 3.0 Spain
Abstract
Rheoencephalography (REG) is a simple and inexpensive technique that intends to monitor cerebral blood flow (CBF), but its ability to reflect CBF changes has not been extensively proved. Based on the hypothesis that alterations in CBF during apnea should be reflected in REG signals under the form of increased complexity, several entropy metrics were assessed for REG analysis during apnea and resting periods in 16 healthy subjects: approximate entropy (ApEn), sample entropy (SampEn), fuzzy entropy (FuzzyEn), corrected conditional entropy (CCE) and Shannon entropy (SE). To compute these entropy metrics, a set of parameters must be defined a priori, such as, for example, the embedding dimension m, and the tolerance threshold r. A thorough analysis of the effects of parameter selection in the entropy metrics was performed, looking for the values optimizing differences between apnea and baseline signals. All entropy metrics, except SE, provided higher values for apnea periods (p-values < 0.025). FuzzyEn outperformed all other metrics, providing the lowest p-value (p = 0.0001), allowing to conclude that REG signals during apnea have higher complexity than in resting periods. Those findings suggest that REG signals reflect CBF changes provoked by apneas, even though further studies are needed to confirm this hypothesis
CitationGonzález Pijuán, C. [et al.]. Entropy measures as descriptors to identify apneas in rheoencephalographic signals. "Entropy: international and interdisciplinary journal of entropy and information studies", 18 Juny 2019, vol. 21, núm. 6, p. 1-21.
URIhttp://hdl.handle.net/2117/172556
DOI10.3390/e21060605
ISSN1099-4300
Publisher versionhttps://www.mdpi.com/1099-4300/21/6/605
Collections
Share: