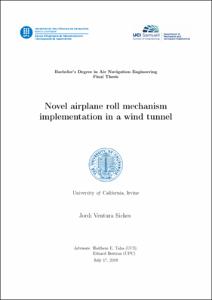 ; Taha, Haithem E.
CovenanteeUniversity of California, Irvine
Document typeBachelor thesis
Rights accessOpen Access
All rights reserved. This work is protected by the corresponding intellectual and industrial property rights. Without prejudice to any existing legal exemptions, reproduction, distribution, public communication or transformation of this work are prohibited without permission of the copyright holder
Abstract
According to recent research conducted by professor Haithem E. Taha and Ahmed M. Hasan, there is a loss in the control capabilities of the ailerons when flying at stall regime. Not only the sensitivity of this control surface decreases in its ability to generate roll moment but it produces the opposite effect, making the aircraft unpredictable. In order to overcome this situation, an unconventional method, called LIBRA, has been devised, involving geometric nonlinear control tools such as Lie brackets. In the numerical simulations, this mechanism would generate up to 4 times more rolling moment than the conventional procedure. The first stage of the experimental research on the LIBRA mechanism consists of finding out the aerodynamic characteristics of a small-scaled aircraft model in which the mechanism will be implemented as well as determining if there really exists a loss in the control capabilities when flying at stall. This experiments will be performed in a wind tunnel and both the forces and moments acting on an aircraft will have to be measured. Currently there exist in the market multi-axis load cells that can measure moments and forces in all directions. However, they have fixed capacities and they are very expensive and delicate. One of the main goals of this thesis will be the design and manufacturing of a modular load cell system able to measure forces and moments in four different axis. Besides, the unconventional method will be thoroughly described from a differential geometry perspective. Finally, by means of the 4-axis load cell system, forces and moments will be measured in different control configurations at stall, in order to test the rolling generating capabilities of the ailerons.
SubjectsWind tunnels, Túnels aerodinàmics
DegreeGRAU EN ENGINYERIA DE SISTEMES DE TELECOMUNICACIÓ (Pla 2009)
URIhttp://hdl.handle.net/2117/172513
Collections
Share: