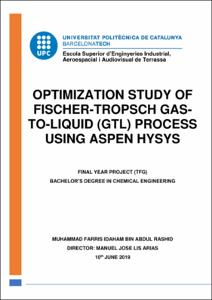 Document typeBachelor thesis
Rights accessOpen Access
Abstract
Fischer-Tropsch (FT) technology is simply defined as the means to convert syngas to a wide range of hydrocarbon products including paraffins, olefins, oxygenates, etc. Interest in FT synthesis is increasing rapidly due to a number of factors including demand of cleaner fuel (low Sulphur, low aromatics), improvement in FT technology and the need to monetize stranded natural gas resources. Hence, there is a strong incentive to further optimize the reactions in a GTL plant so that the overall cost can be reduced. In this study, the overall GTL process was simulated using Aspen HYSYS v8.6. The impact of different parameters on the performance of syngas unit, FTS unit and the overall process were studied. The main objective is to optimize all the main reactions involved in GTL process as well as to increase fraction of desired product. To achieve this, all the important reactions were modelled using kinetic approach obtained from literature and kinetic reactors were used. The Auto Thermal Reactor (ATR) was modelled as CSTR and PFR in HYSYS with kinetic data given by Xu,Froment et al. and D.L Hoang et al. [11], [22]. The main objective function was to increase conversion of reaction and to produce low H2:CO ratio in syngas. Three configurations were proposed to compare the contact model of the ATR using different reactors. CSTR was observed to produce syngas with suitable H2:CO ratio for FTS. Staging of ATR with dossification of feed between stages was simulated however it did not show any improvement on conversion or H2:CO ratio. The FT reactor with cobalt based catalyst was modelled as PFR with kinetic data from Iglesia et al.[27] A few parameters were varied to observe the effect on product distribution and overall conversion. In case 3, the effect of varying void fraction in FTR was studied and the optimal value was recorded. Case 4 explored the effect of multiple stage FTR configuration. Staging of FTR recorded a higher overall conversion and product distribution also improved. An optimal FTR configuration was proposed and showed an even higher conversion compared to the multi stage FTR and an improved product distribution. Some other process parameters were also investigated such as the inlet temperature of ATR and steam:carbon ratio in pre-reformer. Optimization of both parameters showed improvement in the syngas produced. Lower H2:CO ratio of syngas was observed by increasing inlet temperature of ATR and reducing steam:carbon ratio. The optimal GTL plant configuration was proposed at the end of this study.
SubjectsChemical processes, Organic reaction mechanisms, Hysys (Programes d'ordinador), Reaccions orgàniques, Processos químics -- Informàtica, Processos químics -- Simulació, Mètodes de
DegreeGRAU EN ENGINYERIA QUÍMICA (Pla 2009)
URIhttp://hdl.handle.net/2117/172452
Collections
Share: