Wildland–urban interface fires in spain: summary of the policy framework and recommendations for improvement 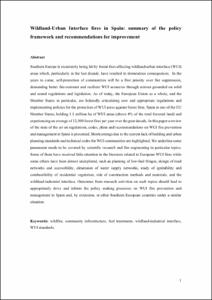 Document typeArticle
Rights accessOpen Access
Abstract
Southern Europe is recurrently being hit by forest fires affecting wildland–urban interface (WUI) areas which, particularly in the last decade, have resulted in tremendous consequences. In the years to come, self-protection of communities will be a first priority over fire suppression, demanding better fire-resistant and resilient WUI scenarios through actions grounded on solid and sound regulations and legislation. As of today, the European Union as a whole, and the Member States in particular, are belatedly articulating new and appropriate regulations and implementing policies for the protection of WUI areas against forest fires. Spain is one of the EU Member States, holding 1.1 million ha of WUI areas (above 4% of the total forested land) and experiencing an average of 12,500 forest fires per year over the past decade. In this paper a review of the state of the art on regulations, codes, plans and recommendations on WUI fire prevention and management in Spain is presented. Shortcomings due to the current lack of building and urban planning standards and technical codes for WUI communities are highlighted. We underline some paramount needs to be covered by scientific research and fire engineering in particular topics. Some of them have received little attention in the literature related to European WUI fires while some others have been almost unexplored, such as planning of low-fuel fringes, design of road networks and accessibility, dimension of water supply networks, study of ignitability and combustibility of residential vegetation, role of construction methods and materials, and the wildland–industrial interface. Outcomes from research activities on such topics should lead to appropriately drive and inform the policy making processes on WUI fire prevention and management in Spain and, by extension, in other southern European countries under a similar situation.
CitationPastor, E. [et al.]. Wildland–urban interface fires in spain: summary of the policy framework and recommendations for improvement. "Fire Technology", 1 Gener 2019.
URIhttp://hdl.handle.net/2117/172446
DOI10.1007/s10694-019-00883-z
ISSN1572-8099
Publisher versionhttps://link.springer.com/article/10.1007/s10694-019-00883-z
Collections
Share: