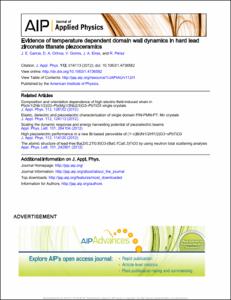 This work presents a study of the domain wall dynamics in Pb(Zr1−xTix)O3 (PZT)-based piezoceramics by means of the temperature dependence non-linear dielectric response and hysteresis loop measurements. In soft PZT, non-linear response gradually increases as the temperature is raised. A similar response is displayed by hard PZT at low temperatures. However, rather more complex behavior is detected at temperatures above 200 K. The anomalous response, which is very marked at room temperature, becomes even greater when the electric field is increased. The non-linear dielectric response is analyzed in the framework of the Rayleigh model. The results suggest a clear change in the domain wall dynamics in hard PZT, which is not observed in soft PZT. Observation of the hysteresis loops confirms that a strong effect of domain wall pinning emerges near room temperature. The change in domain wall dynamics appears as the main cause of the dielectric response difference between both kinds of materials at room temperature
CitationGarcia, J. E. [et al.]. Evidence of temperature dependent domain wall dynamics in hard lead zirconate titanate piezoceramics. "Journal of applied physics", Juliol 2012, vol. 112, núm. 1, p. 014113-1-014113-5.
URIhttp://hdl.handle.net/2117/17242
DOI10.1063/1.4736582
ISSN0021-8979
Publisher versionhttp://jap.aip.org/resource/1/japiau/v112/i1/p014113_s1