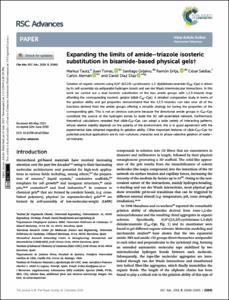 Gelation of organic solvents using N,N0-((1S,2S)-cyclohexane-1,2-diyl)didodecanamide (C12–Cyc) is driven by its self-assembly via antiparallel hydrogen bonds and van der Waals intermolecular interactions. In this work we carried out a dual isosteric substitution of the two amide groups with 1,2,3-triazole rings affording the corresponding isosteric gelator (click-C12–Cyc). A detailed comparative study in terms of the gelation ability and gel properties demonstrated that the 1,2,3-triazoles can take over all of the functions derived from the amide groups offering a versatile strategy for tuning the properties of the corresponding gels. This is not an obvious outcome because the directional amide groups in C12–Cyc constitute the source of the hydrogen bonds to build the 3D self-assembled network. Furthermore, theoretical calculations revealed that click-C12–Cyc can adopt a wide variety of interacting patterns, whose relative stability depends on the polarity of the environment, this is in good agreement with the experimental data obtained regarding its gelation ability. Other important features of click-C12–Cyc for potential practical applications are its non-cytotoxic character and its phase-selective gelation of water– oil mixtures.
CitationTautz, M. [et al.]. Expanding the limits of amide-triazole isosteric substitution in bisamide-based physical gels. "RSC advances", 1 Gener 2019, vol. 9, p. 20841-20851.
URIhttp://hdl.handle.net/2117/172369
DOI10.1039/c9ra03316e
ISSN2046-2069
Publisher versionhttps://pubs.rsc.org/en/content/articlelanding/2019/ra/c9ra03316e#!divAbstract