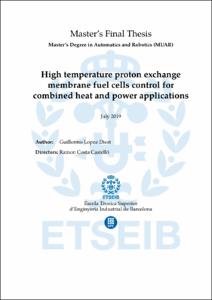 Over the last few years, the research of new energy sources as a substitute for the current de-pletable ones has been increasing. One of these possible sources is hydrogen, one of the mostcommon elements in the planet. By using what’s called as a fuel cell, it can be used to efficientlygenerate clean electrical and thermal energy, as the only output is water.This project has been developed in the framework of the DPI2015-69286-C3-2-R MICAPEM (Pa-rameter estimation, diagnosis and control for the improvement of efficiency and durability ofPEM fuel cells) project, which aims to create an architecture and control of a system that will beable to supply electrical and thermal power to a typically-sized house using a Proton ExchangeMembrane Fuel Cell working at high-temperature (HT-PEMFC).To do so, a Model Predictive Control (MPC) will be used, capable of controlling the amountof hydrogen being consumed based on the prediction of the house’s electrical and thermal de-mand.The numerical computation system Matlab will be used for the creation of the MPC and itsSimulink tool, to model the PEMFC system. Then a series of simulations will be run, which willboth test the controller in several scenarios as well as to understand its behaviour
SubjectsPEM fuel cells, Automatic control, Piles de combustible de membrana d'intercanvi de protons, Control automàtic
URIhttp://hdl.handle.net/2117/172323