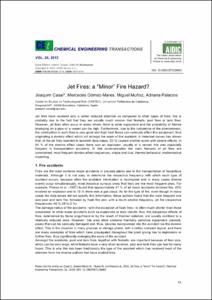 Gómez-Mares, Mercedes
Muñoz, Miguel Ángel
Palacios, Adriana
Document typeArticle
Rights accessOpen Access
Abstract
Jet fires have received only a rather reduced attention as compared to other types of fires; this is probably due to the fact that they are usually much smaller that fireballs, pool fires or tank fires. However, jet fires often occur in areas where there is other equipment and the probability of flames impinging on a pipe or a vessel can be high. Furthermore, due to the turbulence of the phenomenon, the combustion in such fires is very good and high heat fluxes can seriously affect this equipment, thus originating a domino effect which will enlarge the scale of the accident. A historical survey has shown that, of the jet fires reported in accident data bases, 50 % caused another event with severe effects. In 90 % of the domino effect cases there was an explosion, usually of a vessel; this was especially frequent in transportation accidents. In this communication the main features of jet fires are commented: most frequent domino effect sequences, shape and size, thermal behaviour, mathematical modelling.
CitationCasal, J. [et al.]. Jet fires: a "minor" major accident?. "Chemical engineering transactions", 2012, vol. 26, p. 13-20.
URIhttp://hdl.handle.net/2117/17232
DOI10.3303/CET1226003
Collections
Share: