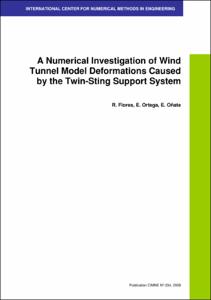 Document typeExternal research report
Rights accessOpen Access
Abstract
This work presents a wing deformation analysis of a twin-sting-mounted commercial aircraft model. Twin-sting arrangements minimize flow disturbances around the model fuselage and tail; on the other hand, they cause important changes in the flow field around the wing and also increase aerodynamic interference at the wing and aeroplastic effects on the wing. In some cases, these effects can alter the normal downwash developed behind the wing, modifying the flow pattern at the tail. Consequently, when tail aerodynamics is a major concern, this kind of support interference should be carefully evaluated. The methodology developed in this work employs an unstructured FEM-based flow solver for computing aerodynamic loads. These loads are then transferred to a finite element structural model in order to assess the geometrical deformation of the wing caused by the torsional moment exerted by the supporting mechanism. The analysis described involves there different twin-sting support configurations taking into account angle of attack variations and Mach numbers spanning from subsonic to high transonic ranges.
CitationFlores, R.; Ortega, E.; Oñate, E. "A numerical investigation of wind tunnel model deformations caused by the twin-sting support system". 2009.
Is part ofPI 334
URIhttp://hdl.handle.net/2117/172211
URL other repositoryhttps://www.scipedia.com/public/Flores_et_al_2009a
Collections
Share: