Improving performance of QUIC in WiFi 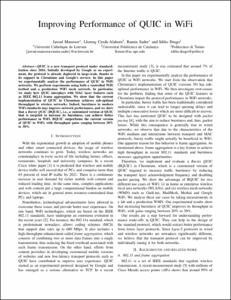 Sadre, Ramin
Drago, Idilio
Document typeConference report
PublisherInstitute of Electrical and Electronics Engineers (IEEE)
Rights accessOpen Access
All rights reserved. This work is protected by the corresponding intellectual and industrial property rights. Without prejudice to any existing legal exemptions, reproduction, distribution, public communication or transformation of this work are prohibited without permission of the copyright holder
Project
Abstract
QUIC is a new transport protocol under standardization since 2016. Initially developed by Google as an experiment, the protocol is already deployed in large-scale, thanks to its support in Chromium and Google's servers. In this paper we experimentally analyze the performance of QUIC in WiFi networks. We perform experiments using both a controlled WiFi testbed and a production WiFi mesh network. In particular, we study how QUIC interplays with MAC layer features such as IEEE 802.11 frame aggregation. We show that the current implementation of QUIC in Chromium achieves sub-optimal throughput in wireless networks. Indeed, burstiness in modern WiFi standards may improve network performance, and we show that a Bursty QUIC (BQUIC), i.e., a customized version of QUIC that is targeted to increase its burstiness, can achieve better performance in WiFi. BQUIC outperforms the current version of QUIC in WiFi, with throughput gains ranging between 20% to 30%.
Description
© 2019 IEEE. Personal use of this material is permitted. Permission from IEEE must be obtained for all other uses, in any current or future media, including reprinting/republishing this material for advertising or promotional purposes,creating new collective works, for resale or redistribution to servers or lists, or reuse of any copyrighted component of this work in other works.
CitationManzoor, J. [et al.]. Improving performance of QUIC in WiFi. A: IEEE Wireless Communications and Networking Conference. "2019 IEEE Wireless Communications and Networking Conference (WCNC)". Institute of Electrical and Electronics Engineers (IEEE), 2019, p. 1-6.
URIhttp://hdl.handle.net/2117/172208
DOI10.1109/WCNC.2019.8886329
ISBN978-1-5386-7646-2
Publisher versionhttps://ieeexplore.ieee.org/abstract/document/8886329
Collections
Share: