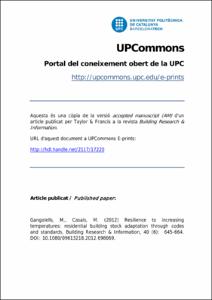 The resilíence of the current Spanish residentia[ building stock to increased temperatures is modelled. Homogenized dai[y temperature data recorded at 50 Spanish meteorological stations for the periods 1950-1979 and 1981-2010 were used to investigate anticipated dimate warming on the Spanish residential building stock by means of the degree-day method. Impacts on residential buildings were investigated for three different future time periods (2011-2040, 2041-2070 and 2071-2100) for three representative Spanish provincial capitals. Future dimate change scenarios comprising two statistical downscaling methods, three general circulation mode[s and two carbon emission scenarios were used to project [ocal dimate. Results show that 72% of current residential building stock in Spain is thermally unprotected. In addítion, the energy demand for heating the building sector in Spain is expected to decrease by between 30% (Barcelona, B2 scenario) and 36% (Valencia, A2 scenario) by 2100, while the respective energy demand for cooling could increase by between 107% (Valencia, B2 scenario) and 296% (Madrid, A2 scenario) by 2100. To inerease resilience to higher winter and summer temperatures, strategies for modifying the built environment are needed, particu[arly for the role of building codes and standards.
CitationGangolells, M.; Casals, M. Resilience to increasing temperatures: residential building stock adaptation through codes and standards. "Building research and information", Novembre 2012, vol. 40, núm. 6, p. 645-664.
URIhttp://hdl.handle.net/2117/17220
DOI10.1080/09613218.2012.698069
ISSN0961-3218
Publisher versionhttp://www.tandfonline.com/doi/full/10.1080/09613218.2012.698069