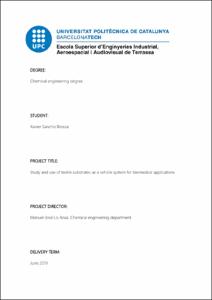 The encapsulation efficiency and the drug delivery of microcapsules of soluble drugs with chitosan is directly influenced by many factors during the process that have not been studied yet. The aim of this project is to make a first approach of the influence of the variables of the process as the concentration of the components of the microcapsules, the stirring times, the process temperature, molar ratios and many other variables. In this project, several combinations of this variables have been tested and analyzed afterwards in order to compare their results and have a first view of the influence of each variable. Also the drug delivery essay have been studied and analyzed to see the effect of different fabrics in different samples of microcapsules, and modeled for achieving a controlled drug release.
SubjectsDrugs, Polymers--Biocompatibility, Biomedical engineering, Medicaments -- Composició, Polímers -- Biocompatibilitat, Enginyeria biomèdica
ProvenancePer motius de confidencialitat, el document original conté altra informació no inclosa en el fitxer de consulta
URIhttp://hdl.handle.net/2117/172171