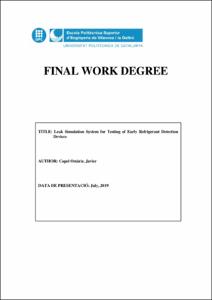 This project has consisted in the design, engineering and construction of an automatic test and demonstration machine which attempts to simulate real gas leaks. More concretely it is based in the developing of a precise machine or system with the capability to achieve a gas concentration desired in ppm (parts per million) in order to test and demonstrate the precision of early leakage detection devices manufactured by the AKO Group, located inside the machine. The main goals have been working on the technical part which includes mechanical, electrical and electronic instrumentation/control engineering which all together allows the performing of the whole system. The structure of this report is based on three main parts. The first one, with the proposal of placing the reader, is referred to the current situation of the refrigeration market, especially centred in operational and economic problems related to refrigerant leaks. Moreover, the need of a smart early refrigerant detection devices for refrigeration stakeholders and as well the current situation of AKO Group as a company, emphasising in solutions promoted until the moment by R+D Department and their limitations and to face these issues. The second and third block is based on the scientific and technical issues required, separated in two parts. One first bloc of basic engineering referring to the solution proposed to face the current limitations, and the second part referred to the detailed engineering evolution that has been followed, addressing it with all the science that the system deals with, including formulas, equations and properties of the refrigerant. Furthermore, focusing on the electronic instrumentation and control part, the project has based on the design and building of a software implemented in LabVIEW platform which manages and controls all the electronic instruments of the system in order to generate a a desired concentration. All of this, injecting mass of refrigerant inside the urn. Moreover, the software acquires concentration data from the tested gas transmitters to visualize the evolution of the refrigerant gas concentration inside the urn. Once the project had been finished, a testing process of the whole machine was made, in order to check out if the initial goals and proposals has been satisfactorily achieved. The conclusions extracted in this project have been satisfactorily accomplished by having achieved the initial goal with success and having the capability of facing some issues and problems occurred during the evolution of the project.
SubjectsLeak detectors, Detectors de fuites
URIhttp://hdl.handle.net/2117/172097