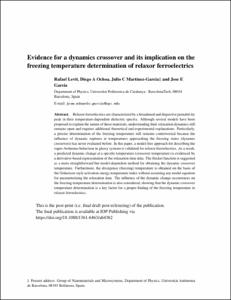 Document typeArticle
PublisherInstitute of Physics (IOP)
Rights accessOpen Access
Abstract
Relaxor ferroelectrics are characterized by a broadened and dispersive permittivity peak in their temperature-dependent dielectric spectra. Although several models have been proposed to explain the nature of these materials, understanding their relaxation dynamics still remains open and requires additional theoretical and experimental explanations. Particularly, a precise determination of the freezing temperature still remains controversial because the influence of dynamic ruptures at temperatures approaching the freezing states (dynamic crossovers) has never evaluated before. In this paper, a model-free approach for describing the super-Arrhenius behaviour in glassy systems is validated for relaxor ferroelectrics. As a result, a predicted dynamic change at a specific temperature (crossover temperature) is evidenced by a derivative-based representation of the relaxation time data. The Stickel function is suggested as a more straightforward but model-dependent method for obtaining the dynamic crossover temperature. Furthermore, the divergence (freezing) temperature is obtained on the basis of the Grüneisen-style activation energy temperature index without assuming any model equation for parameterizing the relaxation data. The influence of the dynamic change occurrences on the freezing temperature determination is also considered, showing that the dynamic crossover temperature determination is a key factor for a proper finding of the freezing temperature in relaxor ferroelectrics.
CitationLevit, R. [et al.]. Evidence for a dynamics crossover and its implication on the freezing temperature determination of relaxor ferroelectrics. "Journal of physics D. Applied physics", 27 Setembre 2019.
URIhttp://hdl.handle.net/2117/171997
DOI10.1088/1361-6463/ab43b2
ISSN0022-3727
Publisher versionhttps://iopscience.iop.org/article/10.1088/1361-6463/ab43b2
Collections
Share: