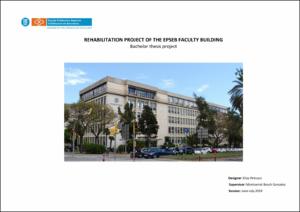 Document typeBachelor thesis
Rights accessOpen Access
Abstract
The Escola Politècnica Superior d’Edificació de Barcelona (EPSEB) faculty building belongs to the South Campus of the Universitat Politècnica de Catalunya (UPC). The building is situated in the district of Les Corts, along the Av. Doctor Marañon, in the city of Barcelona. The EPSEB faculty building was built in 1961 and extended, little by little through the years, reaching its current extension in 1985. Today the building hosts various bachelor’s and master’s degree courses, but it shows a lack of common spaces for students, of university facilities besides humidity and energy problems. The aim of the project is to refurbish the building, in order to get its energy performance as close as possible to the Net-Zero Energy Building (NZEB) European standards and to redesign the current layout of inside spaces, encouraging a better use of common areas and higher quality university facilities. The work of the project is organized in three different phases. The first phase is a preliminary historical research which describes the urban evolution of Les Corts district and illustrates the changing of the EPSEB building through the years. The second phase consists of an architectural survey followed by an analysis of existing energy data linked with the effective use of the building. The last phase is a project proposal illustrating the necessary interventions to achieve a higher quality building in terms of both energy efficiency and architectural composition.
SubjectsBuildings -- Energy conservation, Escola Politècnica Superior d'Edificació de Barcelona -- Edificis, estructures, etc., Edificis -- Estalvi d'energia -- Catalunya -- Barcelona, CampusLab
Location
1: Av. Dr. Marañón, 44, 08028 Barcelona, Espanya
URIhttp://hdl.handle.net/2117/171962
Collections
Share: