Resource, recycling and waste challenges for storage resources in a 100% renewable economy 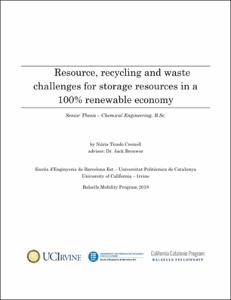 CovenanteeUniversity of California, Irvine
Document typeBachelor thesis
Rights accessOpen Access
Abstract
In this thesis, the battery storage needed for a 100% renewable economy was calculated. It was determined that the use of batteries as a worldwide energy storage solution is not viable. Other systems, such as power-to-gas, would undoubtedly be a better match, as they are much less resource-intense, and they could be combined with the existing natural gas infrastructure for lowered costs. Data was gathered for two regions that would be studied in detail. These regions were (1) Germany, Austria and Luxemburg, and (2) California. An in-depth analysis of the load and renewable generation (from solar and wind) profiles was done, which was used to calculate the amount of battery storage that would be needed in the area, as well as the requirements that an electrolyzer should be able to meet. Data was also gathered for the world, which enabled a study about consumption, generation and current renewable capacity, among others. Solar irradiation and wind maps were used to estimate the potential of each of the renewable sources studied to provide energy in the scenario of a 100% renewable economy. A theoretical approach about electrolyzer technologies, batteries and practical aspects of hydrogen as a gas fuel can also be found in the thesis. The available data for the two regions studied, along with the results of their storage calculations, was used to calculate the fraction of energy that was provided by each of the renewable sources studied. With this information, an equation was obtained and used to calculate the storage needed for other regions in the world if their approximate renewable potential (fraction) and consumption were known. The estimated total energy storage for the world was then calculated considering each of the continents and was found to be a total of 19,981 TWh (100% roundtrip efficiency – ideal battery). Since the average energy density of batteries is known, it is estimated that this amount of storage would require a 133,205 Mt battery, and since the estimated composition of lithium-ion batteries is also known, it was calculated that to build such an amount of storage would be quite resource-intense: 3,143.64 Mt of lithium and 25,815.13 Mt of cobalt. If the reader takes into consideration that the lithium and cobalt reserves are estimated to be about 53 Mt and 145 Mt, respectively, it is easy to see that the calculated amounts required for the battery are, by far, too large to be executed. Due to the low cost of extracted lithium, the fraction of the metal used today that comes from recycling is scaringly close to zero. Most of the recycling processes for lithium are currently only at research stage, and the majority of them combine physical (battery dismantlement and crushing, along with physical separation of compounds) and chemical processes (leaching, extractions, precipitations), the latter being the ones that have traditionally been used in the mine industry to extract metals (hydrometallurgy). They use harsh chemicals that can be cleaned and reused, and finally sent to a dedicated treatment plant as it is done in the chemical industry. These results were obtained by means of gathering and analyzing data on energy consumption and generation profiles, and considering renewable capacities for solar and wind, in the case of the specific regions; considering information on global and continental-based energy consumption and generation amounts, and renewable potentials for the worldwide estimations; and studying the composition and characteristics of the lithium-ion batteries used today, along with the available critical metals reserves, to calculate the amounts of resources that would be needed to fabricate the calculated energy storage devices.
SubjectsLithium ion batteries, Energy storage, Bateries d'ió liti, Energia -- Emmagatzematge
DegreeGRAU EN ENGINYERIA QUÍMICA (Pla 2009)
URIhttp://hdl.handle.net/2117/171926
Collections
Share: