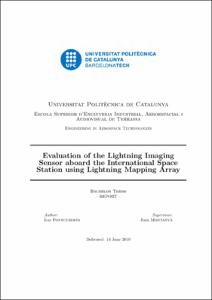 CovenanteeInstitut polytecnique des sciences avancées
Document typeBachelor thesis
Rights accessOpen Access
Abstract
In this work the data from a Lightning Mapping Array (LMA Ebro Delta) and the Lightning Imaging Sensor (ISS-LIS) has been used with the aim to explore which properties of the former make it more likely to have simultaneous ISS-LIS detections associated. To do so, the data has been divided in 10ms time bins; the ISS-LIS and LMA data points inside a same time bin have been associated as a sole emission. Then, the properties of each sensors’ detections have been transferred to the bins, to which have been assigned the properties of both kinds of detections. The analysis has shown a clear relation between the amount of LMA data points in a bin and the likelihood of that bin to have a simultaneous LIS detection. This relation is probably due to the sum of powers of LMA data points; the study has not shown any clear relation between the maximum power recorded in a bin with its simultaneous ISS-LIS detection. Other parameters such as the height of LMA detections has been taken into account; which has shown no clear influence on generating orbit detectable emissions. In this work is also presented an introductory technical report on ISS-LIS and its current data products, as well as the way how they have been treated for acquiring the mentioned results. Plus, it has been performed a literature research with the aim to find a relation between the voltage applied to the open air in order to generate an electrical arc and its emissions on the 777.4 nm band; research that has shown unsatisfactory results.
SubjectsLightning--Measurement, Lightning, Detectors, Detectors, Llamps
URIhttp://hdl.handle.net/2117/171865
Collections
Share: