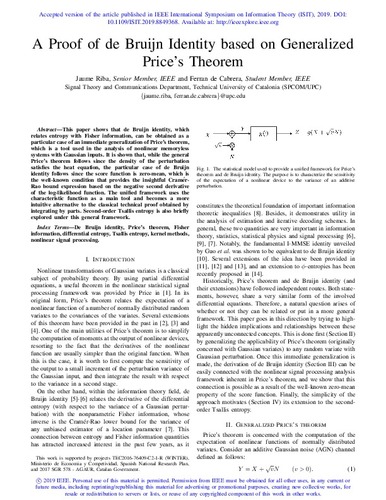 Document typeConference lecture
PublisherInstitute of Electrical and Electronics Engineers (IEEE)
Rights accessOpen Access
All rights reserved. This work is protected by the corresponding intellectual and industrial property rights. Without prejudice to any existing legal exemptions, reproduction, distribution, public communication or transformation of this work are prohibited without permission of the copyright holder
Project
Abstract
This paper shows that de Bruijn identity, which relates entropy with Fisher information, can be obtained as a particular case of an immediate generalization of Price’s theorem, which is a tool used in the analysis of nonlinear memoryless systems with Gaussian inputs. It is shown that, while the general Price’s theorem follows since the density of the perturbation satisfies the heat equation, the particular case of de Bruijn identity follows since the score function is zero-mean, which is thewell-knownconditionthatprovidestheinsightfulCrame ´r- Rao bound expression based on the negative second derivative of the log-likelihood function. The unified framework uses the characteristic function as a main tool and becomes a more intuitive alternative to the classical technical proof obtained by integrating by parts. Second-order Tsallis entropy is also briefly explored under this general framework.
CitationRiba, J.; De Cabrera, F. A proof of de Bruijn identity based on generalized Price’s theorem. A: IEEE International Symposium on Information Theory. "2019 IEEE International Symposium on Information Theory: proceedings: July 7-12, 2019: La Maison de La Mutualité: Paris, France". Institute of Electrical and Electronics Engineers (IEEE), 2019, p. 2509-2513.
URIhttp://hdl.handle.net/2117/171742
DOI10.1109/ISIT.2019.8849368
ISBN978-1-5386-9291-2
Publisher versionhttps://ieeexplore.ieee.org/document/8849368
Collections
Share: