Analysis of crater formation in buried NG pipelines: A survey based on past accidents and evaluation of domino effect 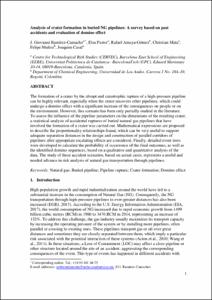 Document typeArticle
Rights accessOpen Access
Abstract
The formation of a crater by the abrupt and catastrophic rupture of a high-pressure pipeline can be highly relevant, especially when the crater uncovers other pipelines, which could undergo a domino effect with a significant increase of the consequences on people or on the environment. However, this scenario has been only partially studied in the literature. To assess the influence of the pipeline parameters on the dimensions of the resulting crater, a statistical analysis of accidental ruptures of buried natural gas pipelines that have involved the formation of a crater was carried out. Mathematical expressions are proposed to describe the proportionality relationships found, which can be very useful to support adequate separation distances in the design and construction of parallel corridors of pipelines after appropriate escalating effects are considered. Finally, detailed event trees were developed to calculate the probability of occurrence of the final outcomes, as well as the identified domino sequences, based on a qualitative and quantitative analysis of the data. The study of these accident scenarios, based on actual cases, represents a useful and needed advance in risk analysis of natural gas transportation through pipelines
CitationRamírez, J. [et al.]. Analysis of crater formation in buried NG pipelines: A survey based on past accidents and evaluation of domino effect. "Journal of loss prevention in the process industries", 1 Març 2019, núm. 58, p. 124-140.
URIhttp://hdl.handle.net/2117/171741
DOI10.1016/j.jlp.2019.01.011
ISSN0950-4230
Publisher versionhttps://www.sciencedirect.com/science/article/abs/pii/S0950423018308593
Collections
Share: